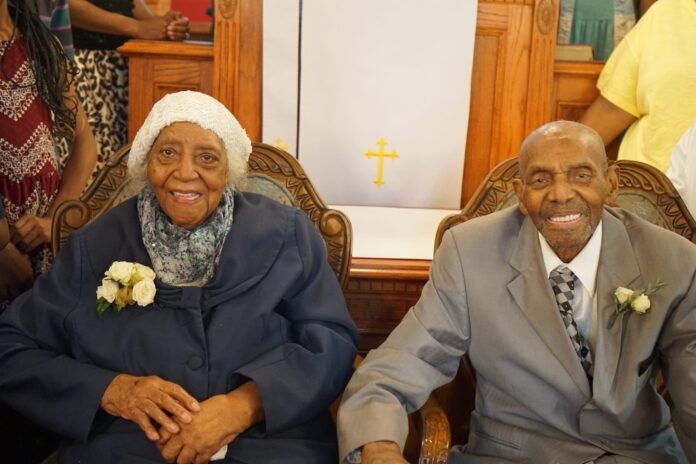 An Arkansas couple married for 83 years has made history for being the longest-married couple in the state.

As reported by Arkansas Online, Cleovis Whiteside, 100, and Arwilda Whiteside, 96, met as kids at church. They tied the knot on July 24, 1939, in Clarendon. The groom was 17 at the time and his bride was 13. At age 14, Arwilda had the first of their 12 kids. Now, nearly eight decades later the couple is still going strong.

“We’ve been together all this long and I still love my life. She still love me and we still get along just good,” said Cleovis, THV 11 reports.

“I ran to him since I was nine years old and I’ve run first to God, then to him ever since,” Arwilda said.

This marks the second year that Arkansas’ longest-married couple has been recognized by the Family Council in Little Rock. The conservative group touts itself as a “leader in the fight to protect marriage.” Per the organization’s website, its “mission is to promote, protect, and strengthen traditional family values found and reflected in the Bible by impacting public opinion and public policy.”

“Mr. & Mrs. Whiteside are a shining example to us all,” Family Council Executive Director Jerry Cox said. “They made a marriage covenant with one another almost 83 years ago, and, by the grace of God, they kept it.”

What’s been the secret to their long marriage?

“They don’t argue and they do love each other,” she added.

“If you get in an argument, one of you has to slow down. If you don’t, you go too far,” Arwilda said.

“There’s one thing I tell the world. I thank God for my husband. I really do,” she added.

The Whitesides will be honored in a ceremony at their church in White Hall on Sunday, according to the report. Arkansas Gov. Asa Hutchinson penned a special letter for the couple, which will be framed and presented to them during the event.

Do you want to stay married like the Whitesides? Here are three of the top tips from couples who may have struggled in the beginning, but made it long-term (25 years or more married).

1. Stop trying to change your spouse.

“The day I accepted that my husband might not ever change,” a wife, married 50 years, wrote about her once-difficult marriage, “was the day things started to change for the better.”

I think the biggest thing is acceptance. We are two imperfect people coming together to do our best. We really have to work at taking time for each other. I also have to catch myself when I default to the ‘if he would only do this’ mindset.

2. Keep divorce off the table.

“It was precisely when I decided that divorce was not an option that my perspective changed,” one woman, married 50 years, recounted, after sharing that divorce had been her back-up plan from the beginning of her marriage:

I am convinced that if I hadn’t changed my attitude from one with a back- up plan of divorce to one of perseverance and commitment to making it work, we would not be married today.

Another woman, whose parents were married 45 years, shared about the struggles…