The best way to get all the nutrients, vitamins and minerals your body needs is to eat fresh fruits and vegetables, but pesticides and harmful chemicals sprayed on crops make “nature’s foods” some of the most toxic.

The EWG’s rankings are compiled from U.S. Department of Agriculture and Food and Drug Administration data on 48 fruits and vegetables with pesticide residue. Two-thirds of produce samples tested positive for pesticide residue.

“For decades, various toxic pesticides were claimed to be ‘safe’ — until they weren’t, and either banned or phased out because they posed risks to people,” Sonya Lunder, EWG’s senior analyst and author of the Shopper’s Guide report said in a statement. “While regulators and scientists debate these and other controversies about pesticide safety, EWG will continue drawing attention to the fruits and vegetables with the highest pesticide loads.”

READ: No More Excuses! Eat Organic On The Cheap

According to the U.S. Environmental Protection Agency, pesticides have been linked to nervous and endocrine system disruption, developmental problems in children and increased cancer risk.

From the list of 48 tested produce items, the EWG offers a quick and easy “Dirty Dozen” list of the 12 most contaminated foods which you should always buy organic (#1 on the list just may surprise you), and the “Clean 15” list of the 15 cleanest foods.

So, don’t stop eating your fruits and veggies! The purpose of this list is to make you a more informed consumer and to help you shop smarter. Buy organic when you can, especially for items on the Dirty Dozen list, and eat plenty of foods from the Clean 15. 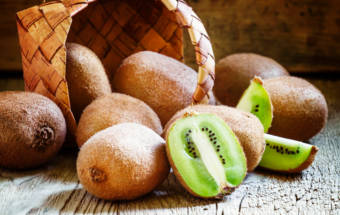