Another of the worst offenders is lipstick, which may contain lead, known to cause numerous health problems, including cancer. In response to a public health effort by the Campaign for Safe Cosmetics, the FDA recently conducted two separate investigations testing lipsticks for lead, and the results were pretty scary. Lead was detected in every single one of the lipsticks tested, and not in small amounts. The first FDA test revealed lead levels up to 3.06 ppm (parts per million), and the second test found lead levels up to 7.19 ppm.

Lastly, be aware that beauty labels are not always honest. In one recent study, keratin-based hair straighteners labeled “formaldehyde-free” were found to contain formaldehyde. While the levels found were fairly low, stylists are at risk because of repeated exposure.

Safer substitute: The generic term “fragrance” can cover a lot of chemical additives; choose fragrance-free products or fragrances made from botanical ingredients. Natural skincare and beauty companies sell natural and organic skincare lines that list their ingredients transparently and are free of phthalates, heavy metals such as lead, and other toxic chemicals.

READ: The 10 Unhealthiest Places In Your Home BPA, or bisphenol A, has been in the headlines endlessly the past couple of years, but that doesn’t mean we know what to do about it, since the news has been both alarmist and confusing. Here’s the lowdown: BPA is a phthalate and a synthetic estrogen linked to cancer, reproductive problems, and heart disease.

In 2010, the President’s Cancer Panel recommended that consumers not use water bottles and other containers made with BPA and urged that the ingredient be removed from commercial production, but that has happened in only a handful of states. Still, BPA-free bottles are now manufactured by all of the major bottle manufacturers, and BPA-free bottles are fast becoming the norm, at least where they are available.

Unfortunately, BPA has been much slower to phase out in other products, such as the lining of cans. Because BPA can react with the metal of the cans, and cans are heated as they’re sterilized, canned food is “high risk” for BPA.

Another ingredient used to make plastics more pliable is diethylhexyl adipate (DEHA), which is also classified as a possible carcinogen. DEHA is in almost all plastic wraps and has properties similar to phthalates, like BPA. Unlike BPA, it has yet to be phased out of most products.

Heating plastic does make it more likely that any chemicals contained in it will be released into food, so do not microwave food in any plastic container, and don’t cover bowls and other containers with plastic wrap when heating.

Safer substitute: Look for “BPA-free” on labels. Use metal water bottles when you’re out, a filtered water pitcher when you’re home. Or get a built-in filter attachment for your faucet. Microwave food in glass or ceramic containers.

READ: The Scary Chemicals Hiding In Your Couch 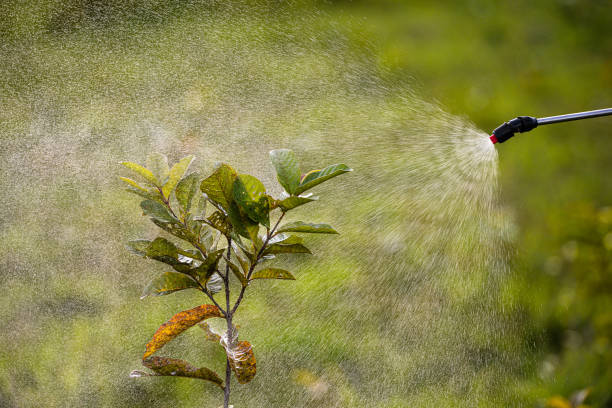 Several common ingredients in pesticides and weed killers have been linked with cancer and Parkinson’s. A 2009 study found a higher incidence of brain cancer in children whose parents had extensive prior exposure to pesticides, herbicides, and fungicides, either at home or at work.

The researchers identified the pesticides and herbicides classified by the EPA as probable or possible human carcinogens (including chlordane, heptachlor, tetrachlorvinphos, carbaryl, propoxur, lindane, dichlorvos, phosmet, and permethrin) as the likely toxins responsible the children’s cancer.

Parkinson’s is also being studied for links to pesticide exposure. One study found that people diagnosed with Parkinson’s are more than

According to self-proclaimed essential oil guru and founder of H. Gillerman Organics, Hope Gillerman, these oils are very effective problem solvers. Find out how below: 1. Flatten your stomach Need to get rid of bloating? Not a problem. “Reduce bloating read more about 5 Ways You Never Thought To Use Essential Oils

It is officially fall! Autumn is arguably one of the best times of the year. With its fun fashions, holidays, flavors, and decor, there’s no question why. One of the best feelings of the season is returning to the warmth read more about “Fall” In Love With These 8 Items For The Coziest Home
Summer brings out many things, like tiny denim shorts, ice cream, moisturized afros, and oh yeah, annoying little bugs. Mosquitoes and ants specifically are living with the belief that it is their time to shine. I live in northern Louisiana, read more about 5 Natural Ways to Repel Bugs and Soothe Bites During the Summer