Home / Wellness / Food / Turkey Bacon: How Healthy Is It? 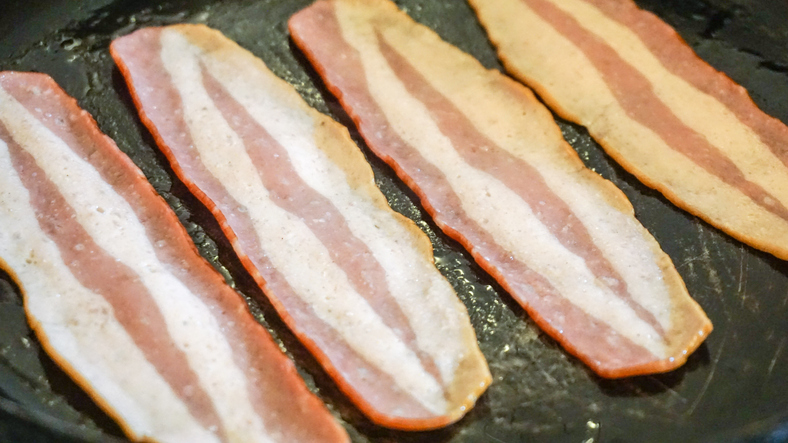 Everybody loves bacon, right? There’s bacon-wrapped this, and bacon stuffed that, and there are so many types of bacon too. But when it comes to bacon, not too many people think of healthy, especially in the Black community because it’s pork. So with the invention of turkey bacon, many bacon lovers think they are eating healthier, but are they really?

“Turkey” combined with any food makes us think “healthy” and “low calorie.” But you may just want to read the package labels when it comes to all turkey products. Here’s why:

But when you look at comparing turkey bacon vs. pork bacon, we can compare nutrition facts. When comparing products from the same company (one of the leading producers of packaged meats):

It’s important to note that turkeys don’t have a belly to slice bacon from (well, turkeys do have a belly, but you aren’t going to get very big slices). Meat processors make turkey bacon from ground up turkey and flavor it to taste like bacon. Ground up dark meat is layered on ground up light meat, and the product is kind of like turkey sausage. These layers of different shades of meat, using ground turkey, allow the processors to add in as little or as much fat as they like. In pork bacon, the amount of fat is dictated by how fat the pig belly was.

MUST SEE: “Healthy” Foods That Are Really Killing You Slowly

The difference between servings of pork bacon and turkey bacon is only about 25 calories. Turkey bacon is leaner, but it has less protein.

While turkey bacon sometimes are modestly healthier than their beef counterparts, they’re often equivalent in calories, fat, and sodium. And just a few slices of bacon can max out your daily recommended intake of salt – less than 1,500 milligrams according to the American Heart Association. Two ounces of turkey bacon has more than 1,900 milligrams of sodium. The same amount of pork bacon contains roughly 1,300 milligrams. In addition to increasing your risk of heart disease, high sodium intake raises the likelihood of kidney stones.

So what’s the bottom line? “Turkey” in a product doesn’t always make it better. With everything, do it in moderation. Even if you eat pork bacon, don’t eat the whole package, limit yourself to…