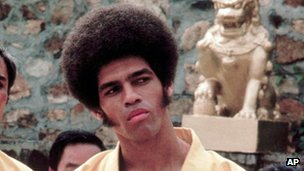 Actor Jim Kelly, who played a glib American martial artist in “Enter the Dragon” with Bruce Lee, has died. He was 67.

Marilyn Dishman, Kelly’s ex-wife, said he died Saturday of cancer at his home in San Diego. Jim’s cancer apparently started in 2011 and began to grow slowly.

Sporting an Afro hairstyle and sideburns, Kelly made a splash with his one-liners and fight scenes in the 1973 martial arts classic. His later films included “Three the Hard Way,” ‘’Black Belt Jones” and “Black Samurai.”

Kelly said he started studying martial arts in 1964 in Kentucky and later moved to California where he earned a black belt in karate. He said he set his sights on becoming an actor after winning karate tournaments. He also played college football.

The role in the Bruce Lee film was his second. He had about a dozen film roles in the 1970s before his acting work tapered off. In recent years, he drew lines of autograph seekers at comic book conventions.

“It was one of the best experiences in my life,” he said, regarding working on “Enter the Dragon.” ‘’Bruce was just incredible, absolutely fantastic. I learned so much from working with him. I probably enjoyed working with Bruce more than anyone else I’d ever worked with in movies because we were both martial artists. And he was a great, great martial artist. It was very good.”

In an interview with the LA Times in 2010, Kelly said: “I broke down the colour barrier – I was the first black martial artist to become a movie star. It’s amazing to see how many people still remember that, because I haven’t really done much, in terms of movies, in a long time.”

He added: “I never left the movie business. It’s just that after a certain point, I didn’t get the type of projects that I wanted to do. I still get at least three scripts per year, but most of them don’t put forth a positive image.

He will be missed.