It was almost four years ago when LUNG FORCE Hero, Colette Smith, went to the ER after experiencing consistent palpitations. Initially thinking that it would be blood clots in her lungs, the doctors instead, found a nodule and deemed it necessary to complete several tests to determine the issue. With each test coming back inconclusive, Smith underwent surgery and It was only after Smith woke up from the surgery that she learned her left lung had been removed and she was diagnosed with Stage 1a lung cancer.

“I was relieved [after diagnosis] because it was the waiting and the testing, and the doctor’s office visits and coming in for the results, that was exhausting and very stressful,” said Smith. “I was relieved to know what it was, what we were doing and what we had done to remedy the situation and relieved that I would now be able to move on.”

Smith, who is a non-smoker, lives in a smoke-free environment and comes from a family that has no prior history with cancer, credits her triumph over cancer to getting screened early. To help heal from the process, Smith attempted to join support groups, however, she ultimately attributes a large part of her healing to finding a pain medicine specialist and cardiologist, doing physical therapy, resting and seeking therapy.

“The [chat] support groups [that I participated in], had people there who were at later stages, so I felt more like an outcast and because the conversations were so hard, often times I would just not participate, but would read what others were experiencing,” said Smith. “So, I found a therapist who helped me put things into perspective and that was a huge part of my healing.” Additionally, Smith continues to eat healthily, walk and engage in what she refers to as “healthy distractions,” including meditation.

However, having previously went through a similar process due to her husband being diagnosed with cancer back in September 2014 and undergoing his surgery the following month, Smith’s says her greatest “healthy distraction” is being an advocate for herself and her community by speaking out against the number one cancer killer and spreading awareness to others, especially in her residence of the Bronx. Currently, the Bronx has an issue with the air as its’ ozone grade is ranked as one of the lowest cities in New York, making the air too unhealthy for its residents to breathe and ultimately putting people at risk with their health. As a key medical officer at her local metro plaza in the Bronx, Smith helps anyone with a troubling diagnosis who seeks advice and is able to offer solutions based off her experience. “It’s important to have a healthy, positive outlook,” said Smith. “With a healthy and positive outlook, you can beat almost anything.”

Unfortunately, lung cancer remains the number one cancer killer among women with the rate of women dying from this disease increasing by 79% in the last 40 years. In addition, every five minutes, a woman in the U.S. is told that she has lung cancer and only 18 percent of lung cancer cases among women are diagnosed early when the disease is most curable.

Although Lung Cancer Awareness Month is highlighted during the month of November, it’s important to help continue to push this deadly issue to the forefront. To do so, the American Lung Association’s LUNG FORCE initiative launched a new campaign, ‘Lock Up Lung Cancer,’ exposing lung cancer as the deadliest cancer by tapping into the popular “true crime” genre. The campaign includes a video series featuring survivors of lung cancer, that will be available online at LockUpLungCancer.org and within online streaming networks such as Lifetime, TNT, A&E and ID, as well as teaming up with podcast hosts from “My Favorite Murder,” “Criminal” and “Crime Junkie.”

No one is safe from lung cancer. In fact, it’s estimated that more than 70,000 American women will lose their lives to lung cancer this year, so don’t hesitate to check with your doctor if you have any concerns or questions. “The doctors are your employees; they work for you and you are the boss of your body, so if something doesn’t feel right…leave, network [and find better care].” said Smith. “It’s okay to be afraid, however, don’t ever have your fears paralyze you in terms of getting the medical care that you deserve.”
To find out more information regarding lunch cancer, be sure to stay informed by visiting lung.org. Shawna Davis is a wellness journalist and the founder and creator of the wellness lifestyle blog, Froing and Flowing. Beyond the blog, she is a certified yoga instructor, wife, dog mama and is a natural hair enthusiast that’s passionate about health, wellness, and natural beauty. You can follow her on Instagram @itsshawnadavis. 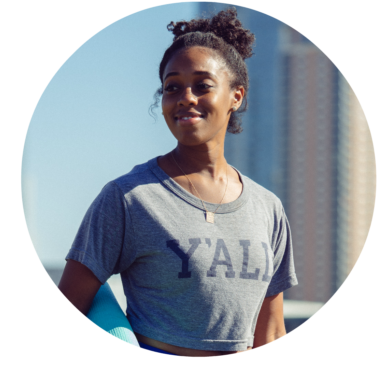 Shawna Davis is a wellness journalist and the founder and creator of the wellness lifestyle blog, Froing and Flowing. Beyond the blog, she is a certified yoga instructor, wife, dog mama and is a natural hair enthusiast that’s passionate about health, wellness, and natural beauty. You can follow her on Instagram @itsshawnadavis.

Women endure a lot of things in the name of beauty: Long and sometimes painful beauty shop appointments, "cute" heels that hurt your feet, and now lipstick, which is supposed to enhance your beauty, could be slowly hurting you. Watchdog read more about 7 Lipsticks That Contain The Most Lead