Recent guideline statements and recommendations regarding the use of prostate – specific antigen (PSA) testing for the early detection of prostate cancer, and the resulting controversy, have led to confusion and a lack of clarity for the men most at risk for suffering and dying from prostate cancer.

Despite high-level evidence for the use of PSA testing as an aid to early prostate cancer detection, and also for its role as a predictor of future risk, the U.S. Preventive Services Task Force (USPSTF) has called for PSA testing to be abandoned completely. The American Urological Association (AUA) and National Comprehensive Cancer Network (NCCN) support a role for PSA testing but with somewhat conflicting recommendations. The guideline statements have endorsed the role of shared decision-making for men considering PSA testing. However, media reports on the PSA test controversy are confusing and preventing many African American men from even having a discussion with physicians about early detection, thereby negating any opportunity for shared decision-making, and in the absence of discussion most men do not have PSA testing.

African American men and certain other men deemed to be at high – risk for prostate cancer, including men with a family history and men exposed to agent orange [4], were not included in sufficient numbers in the two main randomized clinical trials [5] used as the scientific evidence to formulate the PSA test guidelines. Few men, if any, of African ancestry and obviously no African Americans were included in the European trial. Consequently, some guidelines do not directly or clearly address the needs of African American men.

The Prostate Health Education Network (PHEN)* has formulated a set of consensus statements for PSA testing to address the need for providing clear guidance on PSA testing for African American and other high – risk men. These statements rely on “The Melbourne Consensus Statement on Prostate Cancer Testing” adopted by leading prostate cancer experts from around the world at the 2013 Prostate Cancer World Congress in Melbourne, Australia. The three statements herein were excerpted from this statement with modifications.

The PHEN consensus statements are not inconsistent with the AUA Early Detection of Prostate Cancer guidelines, which “invites the consideration of PSA testing for African Americans under the age of 55.” The statements are consistent with the NCCN Prostate Cancer Early Detection guidelines [8], which state: “Although age 50 has traditionally been the age for starting to consider PSA testing, researchers have recognized that high-risk groups such as African Americans and men with a family history of prostate cancer may benefit from beginning testing at an earlier age.”

Absent scientific evidence from randomized clinical trials, guidance on PSA testing for high – risk men must be provided through expert opinion. Studies have shown that African American men as a group are diagnosed with life threatening prostate cancer at an earlier age and with a more advanced stage of the disease. It is believed that these factors contribute to a death rate that is 2.45 times higher than for white men and even higher compared to men of other racial and ethnic groups. Expert opinion has historically held that African American men should begin PSA testing at an earlier age, and the two main randomized clinical trials provided no scientific evidence that disproves this opinion.

The signatories to this consensus statement are medical specialists with extensive experience diagnosing and treating prostate cancer patients. For many, this experience spans the period before the PSA test was adopted, which provides them with a perspective on how African American men presented with prostate cancer before the era of wide-spread PSA testing and more than two decades later today.

Consensus Statement 1: Baseline PSA testing for African Americans and other men deemed to be at high – risk for prostate cancer is suggested beginning at age 40 for predicting their future risk of prostate cancer. Although these men were not included in sufficient numbers in the two main randomized trials, there is strong evidence that this high-risk group of men may benefit from the use of PSA testing as a baseline to aid risk stratification for developing prostate cancer, including life-threatening disease. Studies have shown the value of PSA testing in this cohort for predicting the increased likelihood of developing metastatic and lethal prostate cancer 25 years later for men whose baseline PSA is in the highest percentiles above the median. Those men with a PSA below the median could be spared regular PSA testing as their future risk of developing prostate cancer is comparatively low; however, future testing should not be ignored for these men, but rather a schedule of PSA testing should be discussed and developed with each man’s physician. Those men with a PSA above the median for their age group are at considerably higher risk and need closer surveillance and regular testing. The median PSA for men aged 40–49 ranges from 0.5–0.7 ng/ml, with the 75th percentile ranging from 0.7–0.9 ng/ml. The higher an individual’s PSA is above the median, the greater the risk of later developing life-threatening disease. For example, men in the highest tenth percentile account for approximately half of prostate cancer deaths. A baseline PSA in the 40s has value for risk stratification and this option should be discussed with men in this age group as part of a shared decision-making process. PSA testing should be a consideration for men with a life expectancy of more than ten (10) years.

Consensus Statement 2: PSA testing should not be considered on its own, but rather as part of a multivariable approach to early prostate cancer detection. PSA is an imperfect predictor of current risk and additional variables such as digital rectal examination, prostate volume, family history, ethnicity, risk prediction models, and new tools, can help to better risk stratify men. Further developments in the area of biomarkers, as well as improvements in imaging will continue to improve risk stratification, with potential for reduction in over-diagnosis and over-treatment of lower risk disease. Routine genetic testing may be available in the future to aid in assessing prostate cancer risk for those men with a family history of the disease.

Consensus Statement 3: A prostate cancer diagnosis must be uncoupled from prostate cancer intervention. Although early detection is essential to diagnose high-risk cases within the window of curability, it is clear that many men with low-risk prostate cancer do not need immediate aggressive treatment. With an incidence rate 1.6 times higher than other men, African Americans, as a group, are at an increased risk for over-treatment and potentially suffering unnecessary harms from such treatments. Men should be counseled about their treatment options and caution should be exercised to prevent over-treatment. Active surveillance protocols have been developed and have been shown to be a reasonable and safe option for many men with low-volume, low-risk prostate cancer. However, there is published evidence that African American men are more likely to fail active surveillance protocols than men of other ethnicities. While it is accepted that active surveillance does not address the issue of over-diagnosis, it does provide a vehicle to avoid excessive intervention. Active surveillance strategies need standardization and validation to reassure patients, especially African Americans, and clinicians that this is a safe strategy. The NCCN Prostate Cancer Treatment Guidelines [16] have offered excellent guidance in this area, and an ever-expanding medical literature and informative clinical trials assure continued refinement and confidence in this strategy. In addition there are new prognostic tests currently available and others in various stages of scientific and clinical validation to help determine if the cancer is life threatening.

An important goal when considering early detection of prostate cancer today is to maintain the gains that have been made in reducing metastases and cancer-specific survival over the past twenty plus years since the introduction of PSA testing, while minimizing the harms associated with over-diagnosis and over-treatment. Outright abandonment of PSA testing by large numbers of African American men due to confusion and lack of clarity would lead to a significant increase in the proportion of these men who present with advanced prostate cancer. It is critical not to surrender the gains that have reduced the African American death rate from prostate cancer by more than 40%. This would be a devastating setback for the men who are suffering from the disease at epidemic proportions. The objective of PHEN’s Consensus statement is to provide clearer guidance for these men.

*The Prostate Health Education Network, Inc. (PHEN) is a non-profit patient education and advocacy organization with a focus on African American men. PHEN was founded in 2003 by Thomas A. Farrington, a prostate cancer survivor and author of the books “Battling The Killer within (2001)” and “Battling The Killer Within and Winning (2005).” Why Do More Black Men Die from Prostate Cancer? 5 Reasons You’re Peeing Too Much 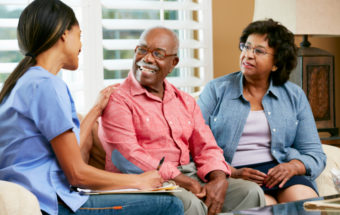