An independent testing lab is asking the Food and Drug Administration to recall nearly 80 sunscreen products with a cancer-causing chemical.

The lab, called Valisure, checks medications and other products for quality.

The company tested 300 sunscreen products and found that 27% of them contain Benzene, according to Valisure. High levels of benzene can cause cancer, particularly blood cancer, including leukemia.

Fourteen of the products contained benzene at levels higher than 2 parts per million (ppm). That’s the FDA’s recommended limit for benzene in medically valuable drugs that can’t be made without it.

To this point, Vailsure discovered that 78 items contain benzene. In turn, Valisure is urging the FDA to recall all of the impacted products.

“Valisure LLC has tested and detected high levels of benzene, a known human carcinogen, in several brands and batches of sunscreen, which are considered drug products by the Food and Drug Administration (FDA), as well as in after-sun care products, which are generally regulated by FDA as cosmetics,” the company said in a press release.

As to the testing and incidence of benzene, Valisure found that 27% of the samples they tested contained levels of benzene that were three times higher than the permissible amount.

“There is not a safe level of benzene that can exist in sunscreen products,” Dr. Christopher Bunick, MD, Ph.D., Associate Professor of Dermatology at Yale University said. “Even benzene at 0.1 ppm in a sunscreen could expose people to excessively high nanogram amounts of benzene.” 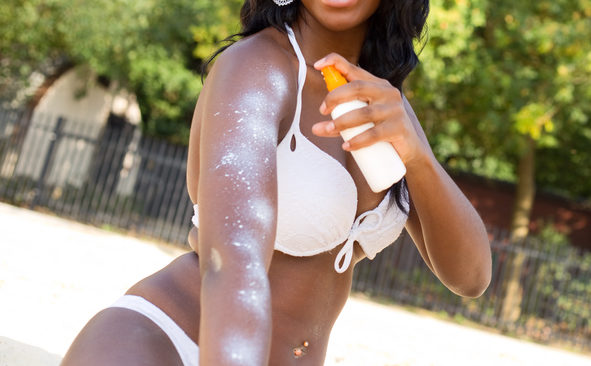 Why is Benzene so bad?

Detailing what Benzene is and why it’s particularly dangerous, the National Cancer Institute notes:

Benzene is a colorless or light-yellow liquid chemical at room temperature. It is used primarily as a solvent in the chemical and pharmaceutical industries, as a starting material and an intermediate in the synthesis of numerous chemicals, and in gasoline. Benzene is produced by both natural and man-made processes. It is a natural component of crude oil, which is the main source of benzene produced today. Other natural sources include gas emissions from volcanoes and forest fires.

Exposure to benzene increases the risk of developing leukemia and other blood disorders.

If the name Valisure sounds familiar, it’s because the lab had previously found benzene in some hand sanitizer products that were subsequently recalled by the FDA.

A sampling of the offending sunscreen products can be seen below. Note that the full list contains 78 items and can be viewed in its entirety over here.

We've used coconut oil in just about every way imaginable, and have no issue swapping out our blush for that cherry flavored, red colored lip balm we love! So what about other substitutions? You are in luck! There are plenty read more about Use What?! 4 Strange Skincare Substitutes

Looking to get rid of bags under your eyes? You may need to only look no further than TikTok. Peter Thomas Roth's cosmetic eye cream products began selling out after a viral TikTok video showing someone using the product racked read more about Woman Inspires with Amazing Eye Cream Results

Fall is on the way and pretty soon people will be trading their short sleeve shirts for sweaters and button-ups. Just as your style changes from season to season, your skincare routine should change as well. During the fall months, read more about Transition Your Skin Care To Fall Fabulous

One of the things I’ve seen people discuss in online pregnancy forums is hyperpigmentation. But please know that it’s not just an issue that pregnant women deal with. Hyperpigmentation, as shared by draxe.com is defined as “darkening of the skin read more about 3 Natural Remedies For Hyperpigmentation

I want to age gracefully and I bet you do too! But, I have some fears about using facial injections such as Botox, and fillers to help me along. No judgment if that is your thing. But, I am always read more about Face Yoga: The Natural Facelift