After Seeing Michael Jordan’s Eyes, Some Fans Are Concerned About His Health The Last Dance is the latest in ESPN’s 30 for 30 documentary series, which goes deep into some of the most important moments in sports. In this particular documentary miniseries, ESPN follows the Chicago Bulls during their 1997-1998 season–the last season that the GOAT, Michael Jordan, played with the Bulls and the last time they won a championship.

The series features never-before-seen footage from that season and new in-depth interviews with Michael and a number of old teammates, players, coaches, and more. Besides being a riveting documentary about things you never knew were going on behind the scenes of an all-star team, many fans are commenting on how Michael Jordan looks now. 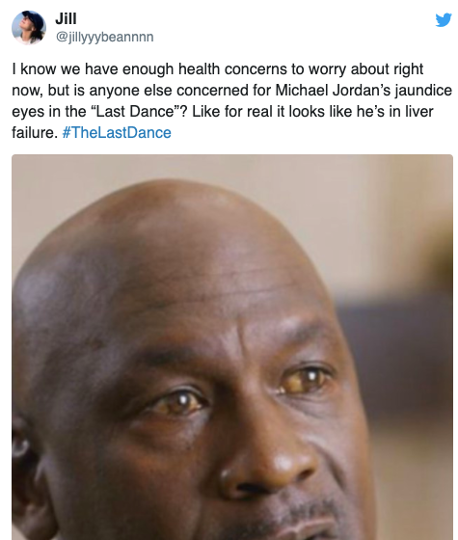 During the series, the camera cuts back and forth to present-day Jordan with one-on-one interviews. Besides the language, some fans can’t get over how yellow Jordan’s eyes look now.

The white of Jordan’s eyes, called the “sclera”, have turned yellow for the most part. They are clearly visible and the majority of his eyes are visibly yellowish leaving many to be concerned about the champion’s health.

According to the American Academy of Ophthalmology, in the eyes of a normal patient, the sclera is white in color and the palpebral conjunctiva (the thin, clear tissue that covers the eye and lines the inside of your eyelid) appears pink. When a patient walks inside the Emergency Room and presents yellow eyes and nail beds, it may be automatically associated with liver or blood problems. But this is not always the case for folks that have a lot of melanin (aka “Black people”).

The color of the sclera of Africans may range from yellow to muddy brown. This is normal and a benign condition commonly seen in our race and is often mistaken as jaundice.

Many mid- to dark-skinned races like Filipinos and African-Americans and some others, have large deposits of subconjunctival fat. This contains high levels of carotene that gives it a yellowish tint that often mimics jaundice. The fatty deposits grow to be denser as the distance from the cornea increases.

Besides alcoholism, there is also a long list of