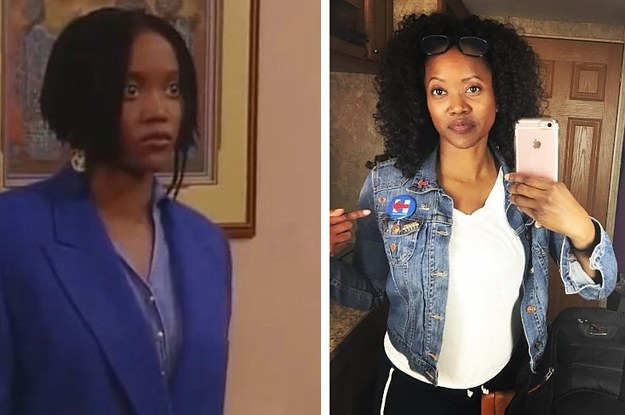 With the news of Queen Latifah bringing back one of her hit shows, Living Single, sitcom lovers around the country are rejoicing. After all, it was the precursor to the long-running hit show, Friends.  Queen Latifah revealed on the Late, Late Show With James Cordon that the president of NBC at the time was asked what new show would be like on his network and he said Living Single, hands down, which was on the rival FOX network. That answer was printed in the paper and next season Friends was on TV with the same premise, six friends living in the same building, etc.

One of Living Single’s favorite characters was played by actress Erika Alexander. She portrayed the role of a strong willed lawyer named Maxine Shaw. Alexander won several awards for her work in the hit TV series, including two NAACP Image Awards for Outstanding Actress in a Comedy Series.

At 52 years old, Alexander has had a very interesting career as an actress. Everybody loved her when she was first cast as “cousin Pam” on The Cosby Show in the ’80s and after that she never had to look back again. Now she’s created shows, directed films and even produced tv content as well. But her career isn’t the thing she’s most proud of, her marriage is.

MUST READ: Kim Fields Went From Miscarriages To Miracles

Alexander has quietly had one of black Hollywood’s most enduring marriages. She’s been married to screenwriter Tony Puryear since 1997, nearly 25 years! Puryear is bi-racial and born to a Black father and white mother while growing up in the Bronx, New York. Tony has worked in advertising and made TV commercials. He’s directed Hip Hop videos for old-school artists like EPMD, LL Cool J and K-Solo. As a screenwriter for the last 20-odd years, Tony’s written screenplays for a who’s who of Hollywood’s A-List, from Mel Gibson to Jerry Bruckheimer to Oliver Stone to Will Smith. He became the first African-American screenwriter to write a $100 million+ blockbuster with the 1996 script for “Eraser”, starring Arnold Schwarzenegger. Erika’s father, Rev. Robert Alexander was an itinerant preacher who moved the family around to several cities before settling in Philadelphia. She was actually born in Arizona, where the family lived at one time. Alexander’s parents were both orphans, but the Alexanders had six children, including Erika. Alexander was discovered first at Philadelphia’s Freedom Theater, and is one of the theater’s most famous graduates. She was the lead in a Merchant Ivory film at 15, and went on to tour with the Royal Shakespeare Company and was then cast in a play by Joseph Papp, who founded New York City’s famed Public Theater.

But the life a fledgling preacher with six children wasn’t always a fruitful one. Because of Alexander’s family’s poverty, she became the family breadwinner as a teenager. “Overnight, I got a career in show business and…

In most cases, how an individual approaches a romantic relationship is deeply rooted in how they were raised. It’s grounded in what they grew up seeing, feeling, believing, or experiencing. Some may take their positive experiences and hold on to read more about 7 Hidden Signs Of A Toxic Romantic Relationship