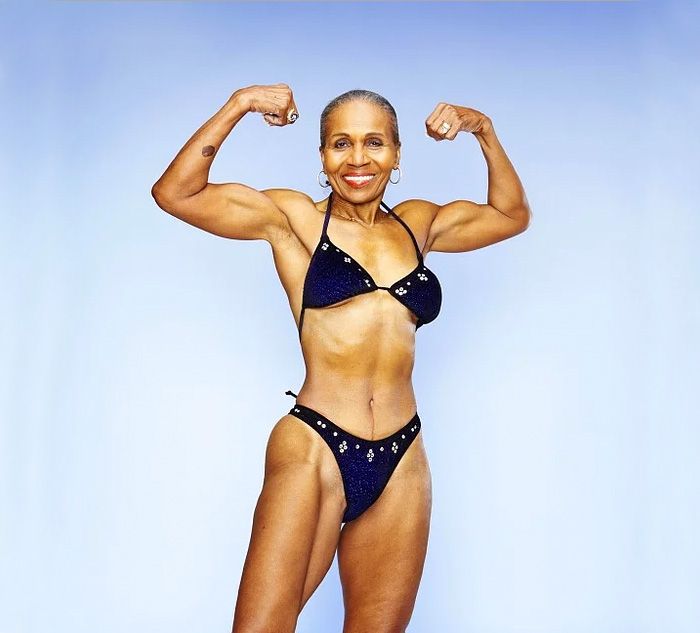 “I really don’t need an alarm clock to awaken me. I wake up at 2:30 every morning. I get up. I say my devotions. Then I’ll eat. I will eat ten egg whites. They’re scrambled, sixteen ounces of water, and a handful of walnuts. I have a certain song that I sing every morning…‘Oh I can’t sit down. Got to keep on rolling…Today I am happy and free…Nothing in the world is troubling me’.” So begins the day for the now 85-year-old Ernestine Shepherd, the world’s oldest female bodybuilder.

This year, on her 85th birthday, the world-famous bodybuilder took to her social media and shared this heartfelt message:

“Good afternoon my beautiful family. I have had a wonderful day. My Fitness Family gave me a beautiful birthday day party this morning. I wish that you could have been there. Our color scheme was yellow and white. A large number of people attended. I received so many gifts but I will not open them until my actual birthday June 16th. I thank God that I have all of you in my life.
Here is today’s devotion:

‘I AM CREATING something new in you: a bubbling spring of joy that spills over into others’ lives. Do not mistake this joy for your own or try to take credit for it in any way. Instead, watch delight as My Spirit flows through you to bless others. Let yourself become a reservoir of the Spirit’s fruit.’

‘Your part is to live close to me, open to all that I am doing in you. Don’t try to control the streaming of My Spirit through you. Just keep focusing on me as we walk through this day together. Enjoy my presence, which permeates you with Love, Joy and Peace.’

Before the start of my party, a group of us did our walk. I know the walk made me feel great. May thanks to everyone for giving me such a beautiful party.”

In an original documentary short from Prevention, we follow a day in her life and learn that for Shepherd breaking a world record has fulfilled a life goal for not only her, but also her sister.

Ernestine and her sister, Mildred Blackwell, were inseparable. One day, at the age of 56, Ernestine was trying on clothes with Mildred. To the sisters’ disappointment, the clothes didn’t fit the way they wanted. Mildred suggested that they begin exercising. So they began weight training together – and it became an essential part of their lives.

Clearly, doing the same thing every day wasn’t Mildred’s style so she proposed a new, higher goal to Ernestine. “You know what we’re going to do. We’re going to be in the Guinness Book of World Records as two of the oldest female bodybuilders. And what’s gonna’ happen is we have something else. We’re sisters…Within a year’s time, if anything were to happen to me, I would want you to keep this up.”

Ernestine was unaware of her sister’s health problems as they began training for this new goal. Sadly, Mildred suffered a brain aneurysm and passed away as a result. Consequently,  Ernestine suffered from depression, high blood pressure, panic attacks and acid reflux. You can imagine that this sucked the energy and will out of Ernestine who “didn’t want to do anything.”

As soon as she gave up, her sister came to her…in a dream. Ernestine recalls her sister saying in the dream, “Get up and do what I asked you to do!” Two weeks later, Ernestine decided to fulfill her sister’s goals by weight training again. Eventually, she worked enough to perform in a body-building showcase competition, in which she earned first place in her age category. A month later, the sisters’ pact with each other manifested into a reality. The Guinness Book of World Records entered Ernestine into the book as the oldest competitive female bodybuilder in the world, just like her sister imagined!