Home / Health Conditions / Arthritis: Rheumatoid / Are You Watching For The Signs of Rheumatoid Arthritis? 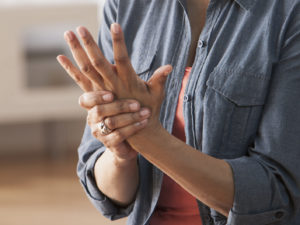 Difficulties with daily activities such as dressing, walking, and eating can be seen in rheumatoid arthritis patients a year or two before they’re diagnosed, a new study shows.

“This is a new finding, and a finding that is quite intriguing,” said lead author Dr. Elena Myasoedova, a rheumatologist at the Mayo Clinic in Rochester, Minn. “It may reflect an accumulation of symptoms between the time of first onset and the time required for providers to actually diagnose patients,” she said in a Mayo news release.

The study also found that chronically increased levels of difficulty with daily activities (functional disability) continued even after patients were diagnosed with rheumatoid arthritis and began treatment. This may be due to a number of factors, including increasing physical and mental pain, the use of treatments such as glucocorticoids and antidepressants, and anticipation of relief from symptoms, she added.

For the study, the researchers looked at 586 rheumatoid arthritis patients and 531 people without the disease in the Rochester Epidemiology Project database of medical records.

Commonplace tasks might become difficult while living with arthritis. Every problem has a workaround, whether you need assistance pressing buttons or opening a jar. Here are 11 great tools for dealing with arthritis. Buckle Up Have difficulties getting in your read more about 11 Arthritis-Friendly Tools That Make Daily Life Easier

If you have rheumatoid arthritis (RA), you're probably used to experiencing pain, swelling and stiffness in your joints. However, because rheumatoid arthritis is a systemic disease, it can also affect your whole body and even lead to the damage of read more about 10 Surprising Ways Arthritis Can Affect Your Whole Body

Food is medicine. Along with any medications or other therapies your doctor advises, consuming foods with antioxidant, anti-inflammatory, and analgesic characteristics may assist if you're dealing with arthritic pain. Here are 9 foods that could reduce arthritis pain and strengthen read more about 9 Foods That Reduce Joint Pain & Make You Feel Better

Water is essential and we all need to stay hydrated, but if you are living with rheumatoid arthritis (RA) the need is even higher. Consuming enough fluids is especially critical for maintaining joints and keeping your symptoms at bay. RELATED: 5 read more about 6 Ways to Stay Hydrated With Rheumatoid Arthritis