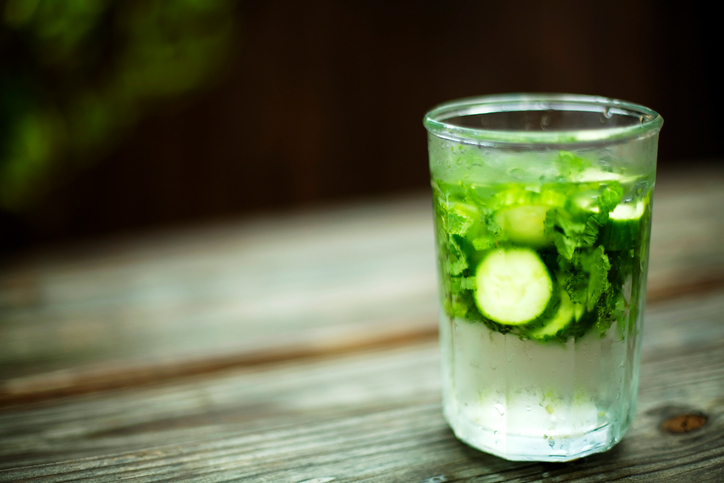 Cucumbers are one of the most underrated ingredients around, even though they have so many health benefits.

They’re made up of mostly water, which makes them a perfect component of a cooling detox drink.

They’re really low in calories and high in fiber, which makes them a great addition to your diet during weight loss because they’ll fill you up and help you feel more satisfied.

We all know that stress can add fat and unwanted inches to our waistline, but cucumber actually fights that. If you’re stressed out, just cut up an entire cucumber and place it in a boiling pot of water, the chemicals and nutrients from the cucumber will react with the boiling water and be released in the steam, creating a soothing, relaxing aroma that has been shown the reduce stress.

Among its other many health benefits, cucumbers are a great source of vitamin B, rich in potassium and magnesium (which may help to lower blood pressure), and have even been known to fight cancer.

They contain an anti-inflammatory flavonol called “fisetin” which studies have shown to help improve brain health.

Cucumbers are a know antioxidant, and also contain polyphenols called lignans, which may help to lower your risk of certain types of cancer including ovarian, breast, and prostate cancer.

To many folks surprise, cucumber is actually a fruit, not a vegetable. Yes, a fruit.

Cucumbers are part of a gourd plant family called Cucurbitaceae and are considered a “cylindrical fruit”.

They grow on vines and come in three main varieties: slicing, pickling, and burpless.

Some quick recipes of cucumber water are:

Cucumber, orange and mint water – Mint is also a rich source of Vitamin C, as well as important minerals like calcium and magnesium which makes this trio an immune-boosting powerhouse.

Strawberry and Cucumber water – The strawberries will infuse the water with additional vitamins that cucumbers don’t have a ton of, namely Vitamin C.

Basil and cucumber water – basil just doesn’t pack extra taste into the water, it’s also a nutrient powerhouse with the amount of Vitamin A it has. The Vitamin A gets turned into beta-Carotene in the body and has a strong antioxidant effect on the body, going to work on free radicals and helping you feel better.
True Benefits of Cucumber Water

There are a lot of health benefits of cucumber water. To start, water helps flush and detox your body, it keeps you…

In the Black community, high blood pressure (HBP), also known as hypertension, is a common health condition to say the least. In fact, more than 40 percent of African Americans have HBP, according to the American Heart Association. Whether it’s read more about 7 Simple Ways To Naturally Lower High Blood Pressure