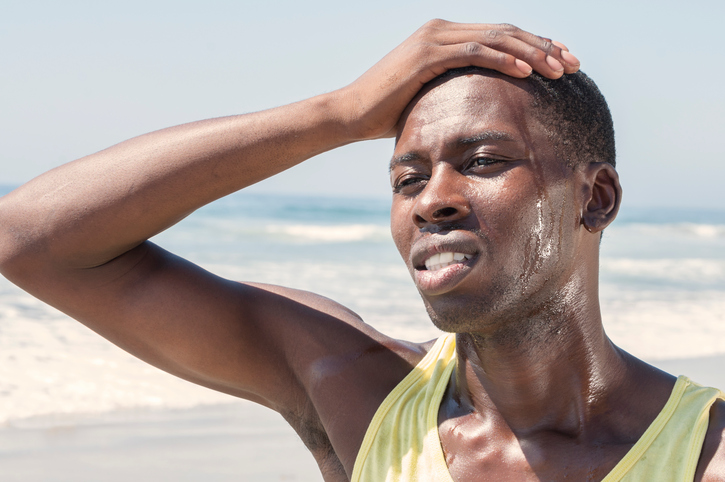 Regular sweating controls our body temperature and body water. We always sweat to some degree, but it’s more noticeable in hot environments, during exercising, or in times of physical or psychological stress. 8 million people in the U.S. suffer from hyperhidrosis, a condition where someone sweats unpredictably and more often than necessary. But how can you tell if you suffer from this?

We have 2-4 million sweat glands in our bodies, concentrated on the forehead, face, hands underarms, and feet. They produce sweat that’s excreted through skin pores to protect us from overheating. As the sweat evaporates, it cools our skin down, says David Pariser, MD, professor in the department of dermatology at the Eastern Virginia Medical School in Norfolk, Va.

Why Am I Sweating More Than I Should?

Researchers aren’t sure what causes hyperhidrosis, but doctors think there may be something wrong between the pathways from the sweat glands to the brain. It appears that the glands are too sensitive in people with hyperhidrosis. This problem may be hardwired in some people. Also, hyperhidrosis tends to run in families — up to two-thirds of people have it their family, says Pariser. And it tends to start in puberty.

Pariser says that hyperhydrosis tends to show itself in three to four areas: Under the arms, on the hands, then on the feet, face, and scalp. But excessive sweating can occur all over the body. The sweating is usually symmetric, meaning that both sides of the body are affected similarly.

Someone could sweat two times or eight times the normal amounts, but both of those people still have hyperhidrosis, he says.

“It’s too much if you have to think about your sweating and have to act in some way,” Pariser says.

For example, someone with hyperhidrosis may only wear dark clothing, or bring three of the same shirt to work to change during the day to hide the sweat. Some people even stuff paper towels or maxi pads in the underarms. If they have sweaty hands, they may always hold a wet drink to have an excuse not to shake hands in social situations like a cocktail party, he says.

Intake of two teaspoons of natural vinegar and one teaspoon of apple cider vinegar thrice in a day is an excellent remedy to cure the excessive sweating. Take this mixture on an empty stomach- half an hour after or before the meal.

Though blackheads are a common form of acne and can affect anyone, studies show that Blacks can be more prone to them than other ethnicities. The problem seems to affect women more than men as well. The good thing is read more about How to Get Rid of Blackheads
To slug or not to slug? That's the question for millions of TikTok users, who turn to the social media giant for tips and information on what amounts to a DIY skincare phenomenon. What is slugging? Slugging involves slathering some sort read more about This TikTok ‘Slugging’ Trend Has People Coating Their Faces With Grease
As a baby, the belly button is a hot topic for new moms. They spend countless hours cleaning what's left of their umbilical cord to make sure that your first scar doesn't become your first infection. But, as adults, we read more about Clean Your Belly Button The Right Way To Prevent Infection

If you have ever considered getting breast implants, you’ve most likely weighed the pros and cons of putting a foreign object into your body. For example, you may have asked yourself “does this put me at risk for developing cancer?” read more about FDA Warns of Rare Cases of Certain Cancers Linked to Breast Implants

Are you tired of your scalp psoriasis making you constantly scratch or pat your head for only 5 seconds of comfort? I know I am. I have put together this list of some of the best home remedies for that read more about 8 Home Remedies to Relieve That Unbearable Itch

Everyone encounters stressful situations, whether that be working with difficult managers, relationship problems, child rearing, a family death, bills and taking our pets to the vet. Life is full of everyday problems. While some people have access to ways that read more about 3 Ways Stress Is Affecting Your Skin