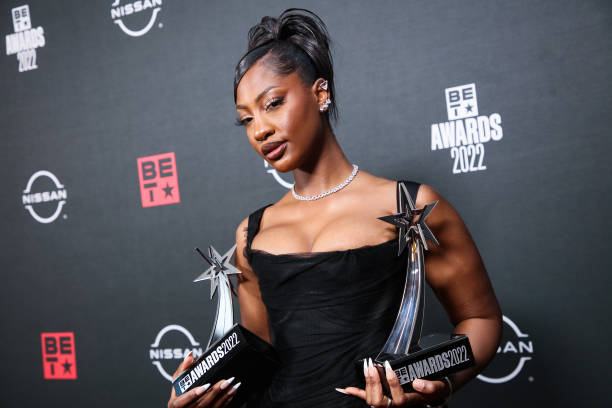 There were more than a few notable moments at the 2022 BET Awards. One of those moments belonged to a young Nigerian singer and songwriter, TEMS. Though she’s made her mark with a historic win, not everyone might know who she is. Let’s fix that!

What You Need To Know About TEMS

Born Temilade Openiyi, TEMS knew she wanted to pursue music from an early age. In fact, she first expressed interest in singing when she was 5. When she was a little older, TEMS joined her secondary school’s ensemble and started recording songs daily.

To complement her growing talent, TEMS taught herself to play the piano. At that point, her favorite singers included Beyonce, Frank Ocean, Rihanna, and Adele.

Despite her hard work, though, the Nigerian singer and songwriter noted that she almost gave up on having a music career because she thought her voice was too “heavy” for the songs she loved. Fortunately, she kept at it and she got her breakthrough in 2018 with the acclaimed record, ‘Mr. Rebel’.

Before her win at the BET Awards, TEMS caught the music industry’s attention when her song, ‘Essence’ became the first Nigerian song to gain traction on both the Billboard Hot 100 and Billboard Global 100 charts. The record even went on to be nominated at the 64th Annual Grammy Awards for Best Global Music Performance.

A few of her other songs made a similar impact on international charts. TEMS was nominated in three categories at the 2022 BET Awards and took home two of the three.

She won the award for the Best International Act and Best Collaboration for her collaboration on ‘Essence’ with fellow Nigeran artist Wizkid.

With the win for Best International Act, she made history as the first Nigerian and African woman to score that award. Given what’s happened so far, there are people in the industry who think this is just the beginning of an illustrious music career.

While her win is great news, her fans will have to wait a little bit longer to see her perform or hear newly recorded music. TEMS recently took to her Instagram page to update her followers that she needed to postpone several of her shows in the United Kingdom. She explained that