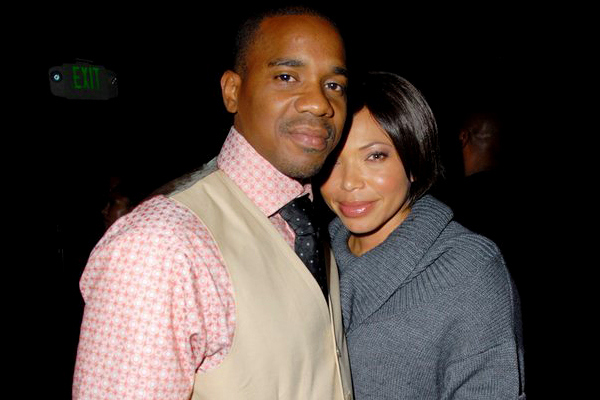 This day and age where you can get marred in a drive-through window like you’re ordering a burger (don’t believe me, go to Las Vegas) and where divorces and cheating is all over television, it’s rare you see a couple stay together beyond seven years. Now, factor in if the couple is in the entertainment business, then the rate of divorce is much higher with weddings lasting an average of only three years.

But one of the most-loved Hollywood couples has been doing it now for 20 years and promises to keep it together for another twenty. Duane Martin and Tisha Campbell-Martin were marred in 1996 and haven’t looked back since. Twenty years and two kids later, the couple is still smiling at each other, making jokes about one another and seen getting flirty with each other after all these years.

When asked what it takes to be married for this long, the couple both jump and agree that it’s all about perspective.

“It’s a lot of laughter, it’s a lot of understanding, it’s a lot of — you know — letting the other person be who they are,” explains Tisha. “We always have very positive people around us. People who are opinion leaders, people who hold us accountable for own actions. We really take that seriously.”

“The number one thing is she’s first to her and I’m first to me,” Duane chimes in. “I want her to be who she is and be great. There’s no jealously going on. If I’m asking you to support me and you’re out of gas, that’s a disaster. I need to have a full tank, she needs to have a full tank.”

“There’s a phase you can get into if you’re not careful: The ‘all right, love ya’ phase, where it’s like you’re doing your thing, I’m doing my thing — ‘All right, love ya,’” Tisha says, with a dismissing hand wave. “That’s where a lot of couples get in trouble.”

YOU MAY ALSO LIKE: Will Smith Says That His Marriage Has ‘Died’

The risk, Campbell-Martin explains, is that couples can drift a little too far apart, making their relationship vulnerable to disaster.

“That’s where cheating, divorce, all that stuff comes into play,” she says.

Married for 10 years, Campbell-Martin recently adopted a new approach to her relationship to make sure her own marriage doesn’t reach that dangerous tipping point.

With this, Campbell-Martin’s entire relationship has shifted.

“We’re in a whole new sexy phase where it’s like, ‘I want to be your girlfriend,’” she says, flashing a wide smile. “I’m his girlfriend right now and he likes me.”

Don’t get me wrong, the Martin’s had their fair share of issues. One was when their son, Xen, was diagnosed with autism. It had the potential to tear a married couple apart. But as Tisha explains, it was Duane that stepped up to the plate.

“Xen was non-verbal [when he was younger],” explained the star. “He would flap his arms and rock back and forth. He’s never been…