My Story: “Getting Started Was The Hardest Thing” Six years ago, Lima resident Marnita Wiggins-Nichols had what she thought was going to be annual routine check up. But what it turned out to be was a huge wakeup call.

Sure, she was overweight like 75% of Black women, but it had never been too much of an issue before. Her doctor informed her that her blood pressure was dangerously high and that he wanted to keep her in the hospital. Wiggins-Nichols declined to stay, but she did leave with the blood pressure prescription and a newfound determination to change her life.

From that day forward Wiggins-Nichols went on a five-year journey to lose an astounding 160 pounds. She went from weighing 334 pounds down to 174.

This busy mother and grandmother is the founder and owner of the The Learning Castle Childcare in Lima, Ohio and can now run and jump and play with her grandsons with energy and vibrancy.

MUST READ: How I Lost Almost 200 Pounds? I First Had To Get Fed Up!

When asked about how she did it, Wiggins-Nichols shares that she was not on a diet: “When I conquered one hurdle, it gave me courage and strength to conqueror the next. Certain changes were drastic, such as pop. I gave it up immediately; eventually I decided that I don’t want to drink anything but water, green tea and decaf coffee, but most other changes were gradual. I was never on a diet, I don’t like that word diet, and it’s a bad word, a NO word. This is a weight loss journey, it’s a lifestyle change.”

Just like it took a lifestyle to lose weight, it also was her lifestyle that made her gain the weight in the first place:

“I was not born with a weight issue,” explains Wiggins-Nichols. “I was a very active young person, in fact my nickname was mosquito. I really think life just attributed to my weight gain. When you are raising a family and after you get off work you are taking children to dance lessons, gymnastics, piano and hockey, on and on, it feels like there is rarely a time to prepare healthy, nutritious meals, even though you want to. You do as much as you can. Also, you go through adversities and food as we know is a comforting type of a thing. So I’ve really just been overweight since my latter 30s, so 15 years or better.” When asked what was the hardest part of her journey, she said something that many of us can relate to. “Getting started was probably the hardest thing. The reason I say that is that it took me so many years. But once I realized I had to make the change it was not hard at all, I just made up my mind to do it.”

Coupled with riding a stationary bike 2-3 times a week, Wiggins-Nichols said it was important to prep her meals. “I meal prep for the week. I eat healthy at least 95 percent of the time. My biggest hurdle now is portion control. Overeating… F.a.T Gurl Fitness: An Inspiration to Us All 130-Pound Weight Loss: “No Matter What Life Throws at You, Keep Going” 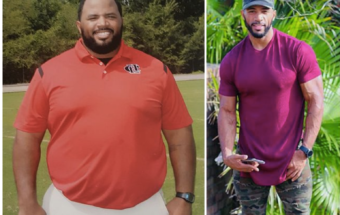 120+ Weight Loss: “Be Better Than Your Best Excuse” One 6-Piece From Sanity: How Weight Is Weaponized Against Black Women

< The Secret To Building Wealth With A Health Savings Account
Gratitude Journaling Made Easy! >