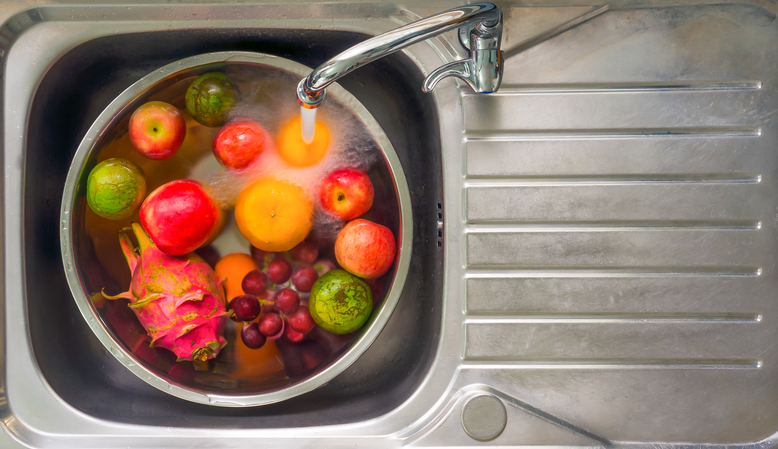 Millions of portions of fruit and vegetables are eaten every day by us, our family members and our friends. Most of us usually rely on quickly running our fruit under running water pretty quickly to “clean” it. But now, as new research has revealed, water may not be the best way to clean your fruit.

Samples of fruit and vegetables from a general grocery store have been found to have traces of up of 11 chemicals. One sample of raisins contained residue of 13 pesticides. Also, it’s been found that fruits like grapes, apples, guava, plums, mangoes, peaches and pears and vegetables like tomatoes, brinjal and okra might carry more residue in their crevices.

Research from the University of Massachusetts, baking soda removes up to 96 percent of pesticides from fruit and vegetables, new research reveals.

When mixed with water and gently rubbed on apple skins, the kitchen staple eliminates nearly all the reside left by commonly-applied pesticides within 15 minutes, the study found.

This method is more effective than the standard procedure of applying a type of bleach to the fruit for two minutes, the research adds.

Previous research reveals baking soda breaks down pesticides due to its highly-alkaline pH, which causes the chemicals to fragment into harmless molecules.

Lead author Dr Lili He from the University of Massachusetts, said: “Pesticide residues may remain on agricultural produce, where they contribute to the total dietary intake of pesticides. Concerns about potential hazards of pesticides to food safety and human health have increased, and therefore, it is desirable to reduce these residues.”

According to 2010 data, washing them with 2% of salt water will remove most of the contact pesticide residues that normally appear on the surface of the vegetables and fruits. Although not as good as baking soda, 75 to 80 percent of…

Historically, alternative treatments—herbs, poultices, and other concoctions—were all we had to improve health and ward off disease. Once we gained better access to healthcare, our use of alternative treatments dropped. These days, however, studies show a steady increase in the read more about 8 Herbs and Spices To Liven Up Your Meals

Winter is almost here and although not everyone gets the opportunity to witness the beautiful snow that come along during the cooler months or have the opportunity to pile on layers of sweaters and scarves, one thing is for sure read more about 8 Benefits Of Drinking Ginger Tea

The cool, crisp air of fall is upon us!  The red, orange, and brown leaves get your mind in gear for foods and flavors that that are warm and hearty. These 6 fall flavors will be sure to keep you read more about 6 Healthy Fall Flavors Your Taste Buds Will Love!